Since I have been religiously following the Leap Program with nutritionist Monique Ryan, I have had to get a little more creative in the kitchen.

"What is the Leap Program?" you may ask?

During Ironman training this past summer, it became increasingly obvious that my body was struggling with food sensitivities. It was not only affecting my race performance, but my health as a whole. Monique suggested getting some blood work at the end of the season and getting to the bottom of it. After my blood tests confirmed sensitivities to such common and seemingly healthy foods as turmeric, black pepper, beef, turkey, and lentils, along with some unhealthier but common race fuel foods like corn, potatoes, and cane sugar, we decided to purge my diet of everything I was sensitive to and spend two weeks only eating foods that were tested safe for my body. Since food sensitivities can show up in multiple ways and hide from test results at times, we started with a list of 20 foods and closely monitored my symptoms to narrow down any other potential culprits. Over time, we will slowly begin adding in other "safe" foods and observing for any negative reactions.

This recipe was a result of a craving for something other than grilled chicken and is definitely one of my more successful experiments! 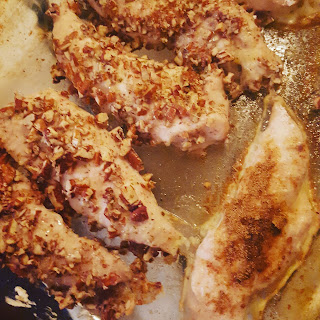 PREHEAT OVEN TO 350' and grease a baking dish with ghee or coconut oil. (I used ghee.)

First, set up your batter station:

Mix ground ginger and cumin in a small bowl. 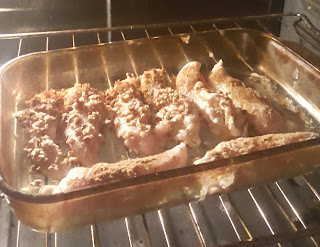 Dip the chicken pieces in the flour, then the egg, then roll in the pecans. Place in baking dish, sprinkle with spices and sea salt and bake for 25 minutes at 350 degrees or until chicken is cooked through.
Posted by Dr. Redmond at 8:33 AM