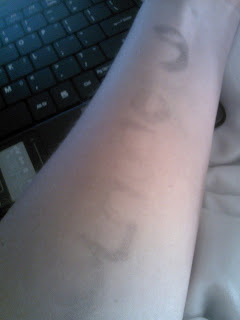 There it is. The fading reminder of the feat I accomplished Sunday.

I had doubts that I could complete such a challenge.  I mean, the distance was no big deal.  I did that just last Sunday...  But the Arctic Enema, in which you must jump into an ice bath and completely submerge?  The Electric Eel, where you get shocked by live wires while crawling on your belly?  I mean, why would I even WANT to do that to myself???

But when my friend and running buddy wanted to put together a team, I couldn't leave her hanging... So I agreed.  I was fearful of injury, but knowing I could bypass any of the obstacles helped put me at ease.  I was still nervous, though.  I mean, it was in the 50's, in the Poconos, with wind, and I was supposed to jump in to a potential ice bath? Fully clothed?  And then continue running 12 miles?? Horror stories of those who had gone before me raced through my mind on a loop... participants who ended up with hypothermia, broken bones, and dislocations...  And the "Death Waiver" I was required to sign did not help my anxiety in the least.  But I wasn't going to back out now.

As I completed the obstacles, one of which was to jump off a platform at least 20 feet tall into a freezing cold lake, it occurred to me that the biggest thing standing between me and accomplishment on most of the obstacles was my own self-doubt.

Prior to the event, I had posted on facebook, alluding to the feeling of being ill-prepared.  A friend commented that I was physically capable of all the obstacles, so just have fun.  He was right (mostly, anyway).  I have to admit that I did choose to skip four of the 30-something obstacles.  My upper body strength wasn't enough to even attempt the uphill monkey bars or the rings.  I tried running up the greased up quarter pipe (a 15ft tall skateboarding ramp) a few times, only to slide to the bottom and decide it wasn't worth it.  And I skipped climbing over the 2 12(ish)-foot Berlin Walls around mile 9, because, frankly, I wasn't about to injure myself this close to the finish line and I didn't know if my knees would handle jumping down that far to the ground on the other side at that point.

But I DID do the Arctic Enema (which, fyi, not only knocks the wind out of you but shocks your body to the point that it's difficult to even bring your head back up out of the water). I lugged a heavy log.  I jumped off that platform into the freezing cold, muddy pond below (and refused the lifeguard's attempts to rescue me).  I crawled under barbed wire, trenches, and tunnels.  I got shocked by live wires, climbed walls and cargo nets, trudged through muddy pits.  At the end of it all, I even balanced across a very wobbly 2x4.

And I had a blast.

I really COULD do all that stuff.  I even sang songs along the way.  And when it came to the very end, my teammates and I held hands and crossed the finish line together.

At the end of the day, aside from being cold, tired, and sore, the most difficult part to overcome were the stories one tells oneself.  "I can't do that." "That's too hard."  Hogwash!  None of it was difficult, unless we believe the stories that we tell ourselves.  There were volunteers present to help and encourage us.  The electric shocks weren't enough to injure you... just annoy you.  The water was deep enough to jump into, but there were lifeguards in the water with you waiting to pull you out immediately.  The water was cold, but nothing we couldn't handle.  As a matter of fact, many people have survived much worse.  The Wounded Warriors that the Tough Mudder raises money for have survived much worse. There was no gun-fire, no bombs, and the First Aid station was only a few miles away at any given time.  Nothing was life-threatening.  But the threat lying in the back of your mind is what makes that 20 foot jump so scary.

How many imagined threats keep YOU stuck? What stories are you telling yourself that are keeping you from having the life you want?

Are you a victim of your own mind?

I have news for you.

Lots of Good information in your post, I favorited your blog post so I can visit again in the future, Thanks.